The Definitive Ranking of 1902 Room Portraits

It’s been an eventful year in the world thus far. I won’t bore you with the details, since I hope you all read the news, but trust me — 2016 has been lit.

Much to my dismay, however, one of this year’s most inspiring events has gone largely unnoticed by local and national media. Maybe you’ve noticed as you walk through the library, but people, the 1902 Room has a new guardian — and you need to pay attention. 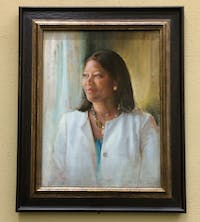 The 1902 Room, that seventh ring of academic hell where I often weep in the wee hours of the morning, is something of a campus landmark. Along its walls are portraits of former Deans of the College, who watch over students from their golden frames. They are our guardian angels, dedicated sentinels who watch over their kingdom, academic gargoyles.

Not all portraits are created equally, though, and with the newest addition I bring you my own opinions on how they stack up against each other.


By far the dreariest portrait in this room. The guy’s sitting in front of what looks like a wall in the middle of renovation, and the closest thing to a bit of color is his dark maroon tie. I don’t know the guy, but this portrait tells me one thing — he believed college was for education, not for fun. Probably (definitely) would have approved of the hard alcohol ban.


Okay, this poor guy’s name alone has made him the butt of endless jokes, but I won’t resort to such lowly humor. To be honest, his portrait doesn’t do much for me. It’s kind of a drab outfit, drab background, drab body language. Laycock gives us a very presidential vibe, but he’s the guy who notoriously banned Dr. Seuss from Dartmouth so what’s he really got to offer anyway?


Okay, this portrait was originally closer to the top. It’s nice, and Brewster looks like a pretty cool guy with some puppy-dog eyes. But I Googled his name just to spellcheck, and found out that during that whole coeducation thing that happened in the 70s, this guy judged a song competition. What did he choose as the winner? A song referring to the women of Dartmouth as “a bunch of whores.” So yeah, maybe this article is supposed to rank the portraits, but art doesn’t exist in a vacuum, kids.


All I can focus on in this portrait is how little his head looks in proportion to his body, so I’ll leave it at that.


This portrait’s got one big thing going for it — location. Positioned squarely above the fireplace, he’s quite literally the center of attention. It’s not necessarily the most gripping image — he’s kind of just sitting there, looking rather unamused and pointing at some nondescript book. His all-black outfit blends into the background, and it’s a rather gloomy image. That being said, the old-timey look gives the school some historical feeling, and it’s placement is as clutch as it gets.


This is a good, wholesome portrait. It’s simple, but Manuel looks like a jolly guy and he’s still got some of his hair left (and I’m a sucker for that green background). Looks like a chill dad who dressed up nicely for the family portrait. You go, Ralph.


I am all about this portrait, honestly. He was clearly an old-school kind of guy, but it’s spiced up with a green background and a lighter suit. And he’s got a bowtie, so he’s, you know, professional but like still fun. He kind of just seems like your cool grandpa who gives you money when you parents aren’t looking.


Easily one of the best portraits in this room. I mean, look at the guy. He’s not wearing a jacket, so you know he’s #casual. Just all leaned back, hands on his knees and smiling ear to ear. He looks like a professor who is just kind of hanging out in office hours, telling you not to worry about the grade and just focus on your final paper (aka he’s rounding your grade up).


Now, this is a portrait. As most of the portraits starting getting smaller, Pelton busts on the scene with a giant portrait reminiscent of the earliest deans. He’s just standing there, a book slightly ajar in his hands, like the painter just walked up to him as he was casually doing some “light reading.” That bowtie? Fashion. That open coat? Fashion. Sanborn wall as background? Fashionably academic. All in all, Pelton looks G.O.O.D.


There are works of art in this world that exhibit so much passion that they could only have been created with divine intervention — this is that kind of art. Johnson, one of the most iconic (and only) women to hold a position of extreme power at this school, has finally entered into the hall of legends. This portrait is beauty. The most defining feature is her small, almost Mona Lisa-esque smirk, that kind of smirk you only get when you break it to the whole student body that Phil Hanlon is just a fundraiser for the college and you’re the one in charge. She’s looking toward the light, which can only be that beautiful warmth of sunny California. Only downside to this portrait is that Johnson has been placed on what is clearly the B-side wall, and I will write to Hanlon immediately in hopes of correcting this.

This portrait can be summed up in a single piece of scripture: “You can be the King, but watch the Deanconquer.”

Now I only wonder if they’ll put an interim portrait of Inge-Lise Ameer up while we wait for Rebecca Biron to finish her post as Dean. Let’s be real, at this rate I doubt we’ll be waiting long before we have another person at the helm.