Few students know that famed author F. Scott Fitzgerald came to Winter Carnival in 1939 and was so inebriated that he was kicked out of Hanover. What even fewer students know is that the reason he was here in the first place was to do research for a screenplay he and Budd Schulberg ’36 were working on. The movie, titled “Winter Carnival”, was subsequently filmed and released in 1939, though ultimately F. Scott Fitzgerald was not given a credit in the film (rumor has it he become very difficult to work with). It may be for the best that his name wasn’t attached to the film, because the movie is not good. The New York Times wrote that it was one of the worst films of 1939, and time has not been friendly to it either. Earlier this week, I rented the film from the Jones Media Center and selected some of my favorite quotes—or “overheards”—from the movie:

The film starts out with subtitles explaining what Winter Carnival is—a joyous salute to King Winter. 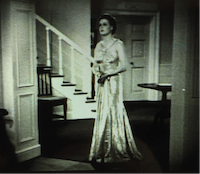 One student exclaims: “Hey Joe, that’s Eleazar Wheelock, not Ichabod Crane. Slap another 100 pounds on his waistline and we’ll be done.”

Then we meet the editor of the Daily Dartmouth, who is portrayed as a career-focused individual who also smokes a lot of cigars. He changes the newspaper’s headline to read “Smooth Babes Invade Campus” as a way to sell more papers, and when the D’s faculty advisor says:

“Keep your mind off women,”

“Sorry chief, you know how Carnival upsets a man’s equilibrium.” (I would be very sad if F. Scott wrote this.)

Meanwhile, hundreds of women from nearby colleges are all on a train to Hanover (the film refers to this as the Carnival Special) to participate in the “Queen of the Snows,” a pageant that actually ran at Dartmouth from 1923 to 1972. While on the train, two young women marvel at how late it’s gotten:

Younger Girl: “Boy, at Ms. Ainsley’s, we’d have been in bed for three hours [by now].”
Older Girl: “Well at Carnival, we never go to bed.”
Younger Girl: “Jeepers.”

Later on an argument breaks out between a wealthy female student and a ragamuffin student/skier/professional clothes cleaner regarding the treatment of imported lace (I told you, it is a terrible movie.) The argument reaches its climax when the female student yells at him:

“You anarchist.” (As if calling someone an anarchist was the sickest burn imaginable.)

Later on in the film, a bunch of skiers sing the Dartmouth Alma Mater, as we know it today, except they sing “sturdy sons of Dartmouth” instead of “daughters of Dartmouth.”

Another argument between another couple breaks out. This time, the argument is punctuated by the closest thing to a F. Scott Fitzgerald-esque line in the movie:

“When are you going to figure out it isn’t Winter Carnival year round?”
It’s like “boats against the current, borne back ceaselessly into the past,” except way preppier and worse in every way.

In a scene where a former “Queen of the Snow” shows up at a fraternity ball, a gaggle of frat brothers swarms her, but not before they each utter one of these killer one-liners to themselves. Imagine someone saying this in a 1940’s accent for full effect:

The movie ends when the former “Queen of the Snow” turned Duchess/tabloid star decides to give up her dreams of traveling the coast to settle down with a Dartmouth professor (Again, it is a terrible movie.) And after all that, this is what she’s worried about:

All photos courtesy of United Artists.