“Doppelgängers” Lily and Lizzie Clark ’20 share an uncanny resemblance. Coupled with their remarkably similar upbringings, their identical looks prove them to be worthy competition for James Detweiler ’18 and Ryan Hunter ’21 as well as Oliver Chartock ’21 and Tony DiPadova ’19. The history for Lizzie and Lily begins the earliest of all.

When asked when she met Lizzie, Lily laughed, “Once I came out of the womb.” Lizzie was born a minute before Lily, so she was there to greet her twin at birth. 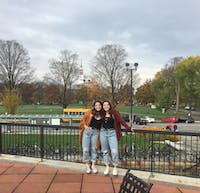 The two have been doing their absolute best to take the throne of “best doppëlganger” as far back as they can remember.

“I remember that we each had a favorite dress, and it was the exact same dress except mine was red and [Lily’s] was pink,” Lizzie said. “We would wear [them] everyday to kindergarten.”

In fourth grade, however, Lily reached an epiphany: “[I realized] we already look enough alike. We don’t have have to match, too. Our faces already look exactly alike.”

When asked about their shared characteristics, Lily and Lizzie had plenty to say.

“Definitely our looks,” Lily said. “I think our personalities are pretty similar.”

Lizzie noted that they have similar interests.

“We’re actually taking all the same classes this term, both played soccer and we’re both in student leadership,” Lizzie said. “I think we have the same style.”

However, Lizzie also noted the caveat that “once you get to know us, it’s easy to tell us apart personality-wise.”

When asked how it feels to have a doppelgänger (and twin) walking around campus, Lizzie was happy to share.

“I love it,” she said. “I think it’s fun to have someone from home and looks like you. We confuse a ton of people though.”

Lily and Lizzie said the best part about having a twin is “having a best friend with you all the time … and you double the wardrobe!”

It can occasionally get a bit contentious between the two of them, especially with regards their respective heights.

The duo believe they are the best pair of doppelgängers on campus.

“Even our close friends mix us up, so I think we look pretty alike,” Lily said. “Twin-wise, I think we’re probably the most identical looking.”

To James and Ryan and Oliver and Tony they have a unified message: “They ain’t got nothin’ on us. They’re fake news. They need to level up.”

Let’s check the table for a full array of the twins’ similarities and differences.

According to Lizzie, KAF workers can distinguish between the twins based on their jewelry:  Lizzie wears earrings while Lily does not. Perhaps there is some hope for telling these doppelgängers apart.