Ahhhh, college. Give a rouse for a liberal arts education and wholesome experiences that have the power to shape you as a person! However, have you ever wondered just how much these experiences have changed how you see the world? Fear not, for I can assure you that Dartmouth experiences have definitely changed you for the better. 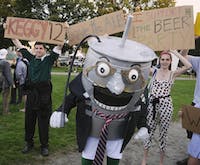 When you hear “jewel” and think “juul.”

We all know the pain of realizing that college is expanding your vocabulary, and not in the way your parents had (probably – no judgment to those ragey alums) intended #SorryMom. You know you’ve reached a new low of degenerate-ness when you hear “batch of cookies” and wonder, “How could they make an alcoholic drink-flavored cookie? That’s WILD.” Or that one time when your friend compliments you on how cute your leather boots are and you can’t help but recall that one night you almost died. And don’t worry, you aren’t the only one who’s #triggered when you see Starbucks advertisements for ~cold~ brews, or when the cute KAF worker asks if you want an extra shot in your coffee (the answer is always yes).

You get sad when club activities don’t involve pong.

Wholesome bonding over pizza and board games with your peers? Meh. Goldman president speaking at your Rocky program? Excuse me while I take a power nap in the back. Don’t pretend you don’t feel that sinking feeling in your stomach every time your club meeting/presentation/~social~/important gathering of any kind doesn’t involve the noblest of pastimes: pong. What is productivity without ping pong balls and questionably crafted paddles anyway?

When you start comparing your current environment to frat basements.

“Sure it’s hot in the Tower Room, but this is nothing compared to Beta.”

“You know it’s gonna be a bad day when the Hop line is longer than lines at Heorot.”

When the search for the scene becomes second nature.

If your daily to-do list reads something like: wake up, black in, find the scene … that’s when you know. If steps two and three of that list have become part of your daily vocabulary … that’s also when you know, so pls go reread #2. “Wts” has replaced “wya” as your classic 1:00 am text, and even your classic 1:00 pm text (because there’s no scene like a Blobby scene amirite #MDF). Never fear, though, the scene is easy to find! Coming soon to a smartphone near you we have ~Find My Scene~ — read more about it here!

When normal words start autocorrecting to degenerate ones.

Your phone knows you better than anyone else — admit it. So it should come as no surprise that Siri has quickly learned your new degenerate tendencies. “Rabbit” may or may not correct to “fracket,” and “Heorot” has long been a part of your phone’s dictionary, even despite the fact that it took so long to figure out what order all those vowels went in. You may or may not have accidentally told your mother that your cousin was being “fratty” instead of “bratty” yesterday, and “rage” often pops up as the first suggestion after you type “I’m ready to…” Somewhat terrifying? Maybe. Useful in daily life? ¯\_(ツ)_/¯

When the first word of this article’s title made you think of something … ~else~.

You saw that. Admit it.*

*If you didn’t see it– congrats! You’re less of a degenerate than the rest of us. Stay golden, Ponyboy.