I took this article because it spoke to me on a deep level. “Why?” you might ask. Well, because I meant to take it last week, but I never got around to blitzing my editors. It seemed like a great idea on Sunday night so I thought to myself: I should really blitz someone about this. But then “Game of Thrones” came on and I resigned myself to waiting until Monday morning, at which point I decided that I was too busy to think about it and that Tuesday would be a better day to write an article. That went on until Friday when I shrugged my shoulders in defeat and reminded myself “there’s always next week.”

It’s a small miracle that I didn’t repeat the same cycle this week. When week seven rolls around my desire to do work plummets. Not that I wanted to do work week one—it’s just that a lack of sleep combined with the fact that the sun has actually returned to Hanover makes it nearly impossible to get anything done. With papers and midterms piling up (and the impending doom of finals approaching), it seems that there is but one simple solution: procrastinate and do nothing. 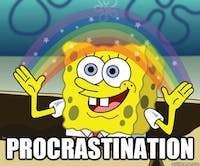 After almost three years at Dartmouth, I’ve finally gotten around to compiling a list of my tried-and-true procrastination strategies:

1. Go through your phone contacts and call anyone you haven’t spoken to in a while. Oh, hey, Great Aunt Sally! How’s it going? You could also call the pizza delivery guy from your hometown. And if things are really dire, maybe even lob in a call to your parents. Time spent: 3 hours.

2. Watch some experimental films. Forget “Gone With the Wind,” “Star Wars” and even “The Lord of the Rings” series. Instead, try watching “Matrjoschka.” It’s an experimental film by German artist Karin Hoerler. If you actually take the time to watch this film (which is pretty much based on different versions of the same image with imperceptible movements and no sound), you will effectively reach a new level of procrastination and become my idol. Time spent: 3 days, 23 hours.

3. Go crazy with apps. You can always go for the classics like Facebook, Tumblr or even Blitz (I can spend hours “cleaning my inbox”), but occasionally, I like to spice things up a bit. Sometimes I get—I’m not quite sure how to say this—motivated? I get so fed up with my own procrastination that I need to take measures to ensure my productivity. In these moments I like to use the “Self-control” app, which keeps me from accessing distracting sites on my laptop. What inevitably follows is me checking Facebook, Tumblr and Blitz on my phone. And because of the smaller print on my phone, it takes me longer to read things, which actually ends up doubling the amount of time I spend procrastinating. Time spent: 5 hours.

4. Read a book. Obviously not a book that’s been assigned for class. That would be counterproductive to your procrastination efforts. Instead, trick yourself into thinking that you’re being productive: re-read the “Harry Potter” series, or go to the Tower Room and grab Dartmouth’s copy of Snookie’s autobiography “It’s a Shore Thing.” Basically anything but that book you’re supposed to write an essay about for your 10 tomorrow. Time spent: 3-6 hours.

5. Open up a Word document, put a heading on the page and then just stare at it.Alternatively, open a Word document and begin brainstorming a title for your paper. The paper you’re about to cram in 30 minutes needs a kickass title if it’s going to have any chance of getting a good grade. Time spent: At least an hour.

6. Take a nap. Treat yourself, you deserve it. Time spent: You’ll tell yourself 30 minutes, but it’ll be at least 3 hours.

7. Procrastinate while studying. Open a book, convince yourself that the act of starting to study is the hardest part of studying and then take a break. Listen to some music, watch some TV, go to dinner. Heck, take a vacation! That was some great studying you just did! Time spent: 2 hours.

8. Take food breaks. This method of procrastination just makes so much sense: you need sustenance to survive, ergo your fifth Novack run of the night is entirely necessary. Time spent: 5 breaks of 20 minutes each (the time it takes to get a pepperoni hot pocket and socialize with your friends who will also be up all night).

9. Think about going to the gym. Emphasis on the “thinking” part. Tell yourself that exercise is good for you and that you’ll go to the gym after one episode of “It’s Always Sunny in Philadelphia.” Then look up from your computer in horror hours later. Time spent: However long it takes to watch an entire season.

10. Try “productive procrastination.” For me this generally involves starting my summer internship and housing search when I have a midterm the next day and a novel to read by my 10A. Time spent: Indefinite. Jobs are hard to find.