Unlocking the Secrets of “Space Jam”

One of the most bizarre chapters of “Looney Tunes,” basketball and cinema history was the release of the 1996 film “Space Jam,” starring Michael Jordan, Bugs Bunny and you know the rest (otherwise you wouldn’t have clicked on the link). One of the most underrated aspects of the film is its corresponding soundtrack, which features such hits as R. Kelly’s “I Believe I Can Fly” and Steve Miller’s “Fly Like an Eagle.” But by far, the crown jewel of the “Space Jam” soundtrack is the eponymous “Space Jam” by the Quad City DJ’s. It’s a perfect representation of the film, in that you feel warm feelings of nostalgia listening to it, but when you remove that nostalgia, you realize just how truly odd it is. 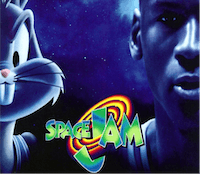 
Party people in the house let’s go
It's your boy "Jayski" a'ight so
Pass that thing and watch me flex
Behind my back, you know what's next

To the jam, all in your face
Wassup, just feel the bass
Drop it, rock it, down the room
Shake it, quake it, space KABOOM


Jayski then provides a series of confusing metaphors about basketball and dancing before making an impressive basketball-related innuendo in this theme song for a children’s movie:

But my favorite part of the “Space Jam” soundtrack is not even the song by the Quad City DJ’s. It’s a song entitled “Buggin”:

Why is this song my favorite, you ask? Well, first off, it’s performed by none other than Bugs Bunny and his rhymes are fire. Take this Ill Fayze level of poetry, for example:

Like Trump's wife,
Up to my ears in carrots,
Not even the barber can fade da rabbit.


This is not a joke, it is absolutely true.

So the next time you’re feeling nostalgic (and want people to leave your basement), play “Space Jam” by the Quad City DJ’s or literally any of the hundreds of its mash-ups.