Streeter Shower:Located on the first floor of Streeter, this shower offers great lighting and a relatively clean atmosphere. With a smell best described as "scent of a room with toilets in it," this shower offers two shower heads across from each other divided by a shower curtain. When I first turned on the water, it was frigid and took roughly a minute to warm up enough for me to immerse myself completely. Fortunately, unlike the showers in the neighboring Gile or Lord, there is a handicap railing in case you pass out from shower-induced hypothermia. Overall, my experience in Streeter was a negative one. I shan’t be walking the quarter mile from where I live to Streeter to take a shower, and I don't recommend anyone else do so either. 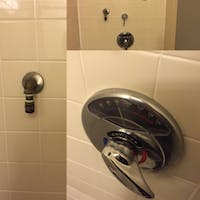 French Shower:Located in the far-off River cluster, this shower is less a hygienic tool and more a drug-induced art installation. To enter the shower you must open one of two bathroom stalls then pull aside a curtain. If that seemscomplicated to visualize, imagine the mental gymnastics one has to perform to enter and exit this shower. This shower even comes witha hazard warning on the outside of it that reads: "MAKE SURE THE SHOWER CURTAIN IS COMPLETELY INSIDE THE SHOWER AND CLOSE IT COMPLETELY WHILE RUNNING THE WATER,” followed by a preposterous amount of ellipses. The warning continues: “THIS WILL PREVENT THE FLOOR FROM BEING FLOODED.” The only way this shower could have appeared more ominous is if there were a sign that said “TURN BACK YE MORTALS WHILE YE STILL HAVE CHANCE, WE KNOW NOT WHAT WE HAVE WROUGHT ~ Residential Operations.”

A nice perk of this shower abomination was that the water was hot. Additionally, since there were two shower heads opposite from each other with no divider, I had shower water coming at me from the front and back. (It was a real challenge not to make this last sentence sound dirty.)

North Massachusetts:Located in cozy North Mass, walking into this shower room was like walking back in time to a pre-gentrified Brooklyn. The muted colors and loud hissing sound from the light brought to mind visions of an old-timey orphan shoveling coal to power the contraption. The shower’s crazy T-shaped handle seemed like it was forged by some iron worker as a sad, Great Depression era gift to his wife. The water in the shower was immediately hot, though, and seemed to contain no discernible traces of polio. Overall, showering in North Mass was a great experience, and it proved to be the bestplace to shower after a Great Gatsby themed party.

North Fayerweather: Located in the far corner of North Faye, this was by far the fanciest shower I have ever seen in my life. The room smelled like clean laundry, mostly because the shower hooks were covered in it. The lighting was great, but the real draw of the room was the shower itself. It came equipped with a thermometer in the shower handle, which tells you the temperature of the water as well as the optimal temperature for taking a shower (~100 degrees). However, this shower also had a mystery handle that seemed to do nothing but change the flow of the water from the official spout to a rustier spout. I tried twisting the mystery handle back to its original place, but it remains unclear if I fixed the problem or not. If you use this shower and I broke it, I am truly sorry. But then again, you have the fanciest shower on campus, so I feel a little less bad. (Update: I checked out this shower again, and I, in fact, did not break it.)

If you have a shower that you would like Dartmouth’s #1 shower expert to review, please blitz William.H.Peisch.16@dartmouth.edu.

All photos courtesy of Will Peisch, The Dartmouth Staff

Will Peisch, The Dartmouth Staff