When ordering takeout, it’s the protocol for the employee to ask the customer’s name for their order. The employee that picked up the phone for Ziggy's Pizza knew the rules, but when I told him my name, a surprising amount of confusion ensued: 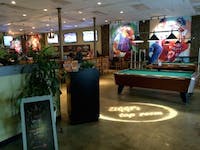 "No. Sam," I replied once more, tempted though I was to assume the identity of Pam if it meant getting my food.

With that settled, I was ready to order. If you haven't noticed, I’ve written my fair share of pizza reviews, so I opted for twelve boneless wings with Ziggy’s signature Maple Chipotle BBQ sauce, and set out for West Lebanon.

The ambience was that of your typical sports bar—picture a youth soccer team out for pizza after a big game, or hordes of Patriots fans crying as the Broncos beat them in the AFC championship. With pool tables, a full bar and countless TVs, Ziggy’s is the perfect setting for both occasions.

The wings themselves were unremarkable—they were fried and greasy, and left me wondering how much of them was meat and how much was batter. The sauce, however, was a welcome departure from the typical buffalo or barbecue blend. The chipotle added a powerful and pleasant kick, while the maple balanced out the heat (and paid homage to the Upper Valley). Pairing the wings with creamy blue cheese made for a magnificent mélange of flavor.

When researching Ziggy’s Pizza (food writing isn't all fun and games, you know, you have to be willing to put in the hours), I found reviews that could generously be described as “mixed.” My personal favorite was a Yelp review that suggested the reader “go to Chili’s instead.” While Ziggy’s may not break any new ground in the pizzeria-sports bar category, I got a tasty meal for a modest price, and for that I am grateful.