A year after the death of Crispin Scott '13, who passed away while on a transfer term in Barcelona, departments within the College and its graduate schools have explored ways to ensure student safety on study abroad programs, according to various administrators. After Scott's death, former College President Jim Yong Kim tasked Acting Associate Provost for International Initiatives Lindsay Whaley with examining student preparation before studying abroad, Whaley said. Whaley led two meetings with administrators involved in international programs at all levels of the institution, including graduate programs.The motivation behind the meetings was a combination of Scott's death and a routine review of policies and procedures, Whaley said. Students traveling on Dartmouth programs which, unlike transfer term programs, are affiliated with the College must complete a health and safety orientation in addition to other pre-departure programs pertaining to student life abroad, Off-Campus Programs Director John Tansey said. The Committee on Instruction and the Registrar's Office are the two bodies that specifically handle transfer term students, and they only focus on academic instruction, according to Committee on Instruction Chair Hakan Tell and Registrar Meredith Braz. Transfer term students do not have any mandated health and safety training, they said. During the meetings, it became apparent that there was no collective effort to provide pre-departure health and safety training and no single place where students could locate relevant information about their study abroad programs, Dickey Center for International Understanding Student Programs Officer Amy Newcomb said. There is little communication among departments, and some areas are so understaffed and under-resourced that they cannot provide adequate pre-departure safety training, she added. The meetings demonstrated that there are already many effective measures in place on campus but that they are inconsistent, according to Whaley. Additionally, it is difficult to ensure pre-departure orientations for certain groups of students, including those who are travelling independently or who are not on campus before their terms abroad, he said. The Dickey Center was already in the process of creating three video modules pertaining to safety, health and wellness and emergency response for students travelling abroad, Newcomb said.

While negative campaign advertisements are equally persuasive when sponsored by independent groups or candidates themselves, candidates who sponsor such ads are likely to experience greater political backlash, according to a study authored by government professor Deborah Brooks and Michael Murov '07. The research focused on the effects of the "Stand By Your Ad" provision of U.S. 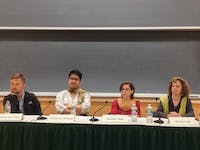