The Vox News email arrived four minutes ago. Just like every night, I lay awake in bed, quivering with anticipation as I awaited the arrival of my favorite newsletter. When it finally came, it only took me a couple minutes to read. I think that might be a new record. I’ll have to check my other records later. Now that the Vox O’Clock is here, I can finally sleep. But before I do, I wanted to mention one more thing. There was a really interesting paragraph in Vox today … it said that if we see a bat in a dorm, we should catch it and bring it to an animal rehabilitation center. I never knew that! I think that’s really cool. 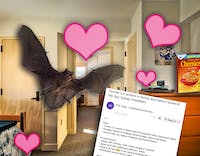 I was awakened about half an hour ago by the sound of fluttering wings. At first, I thought it was just a part of my dream — my dream involved beautiful butterflies, always fluttering just out of reach, so close but yet so far. When I woke up, I realized that there was actually something flying around my room. This is the most exciting thing to happen since the Vox News email arrived, I thought. I turned on the light and there it was: a bat! I instantly remembered what I had read just about an hour beforehand. I had to catch the bat. I won’t bore you with the details, but let’s just say that I need to buy more Cheerios and duct tape. Now the bat is safely wrapped in an old towel. I am exhausted. It is exhausted. I should drive it to the animal rehabilitation center, but that will have to wait until morning.

I just finished my 9L (I love 9Ls almost as much as I love Vox News. I exclusively take early-morning classes). I ran back to my room as fast as I could to see my bat. He (She? They? It?) had chewed at the old towel but luckily hadn’t managed to escape. I gave it a bite of my pumpernickel bread. “I will name you Pumpkin,” I said to it. I am so happy with my bat. I know that I should drive Pumpkin to the rehabilitation center, but I want to hang out with Pumpkin for a little bit. It’s so nice to have someone to talk to.

I have made Pumpkin a nest out of my old PubPol 5 readings. Pumpkin seems happy. I hope Pumpkin is settling in well.

Something terrible has happened. Exactly one minute ago I received a blitz that the College actually does NOT recommend that students catch bats. They actually advise AGAINST it. Apparently I should’ve called SNS last night instead of using all my Cheerios and duct tape. I can’t believe that Vox could ever be wrong, or that my newfound love for Pumpkin could be wrong. I feel numb.

I’ve done a lot of thinking since that blitz. I realized that even if what I did was wrong, I can’t possibly give up Pumpkin. I may have caught Pumpkin but Pumpkin caught my heart. We have become best friends. Pumpkin even gives me little love bites sometimes!

The blitz did mention health and safety issues – I wonder what those could be?