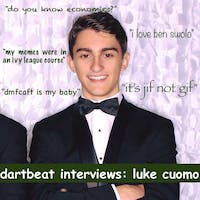 For all of administration’s talk of creating “alternative social spaces,” it appears that the most successful non-Greek social space is not a physical, college-built structure that bears striking similarity to a clove of garlic. Rather, “Dartmouth Memes for Cold AF Teens,” Dartmouth’s student-created and driven Facebook meme page with over 10,000 members, lays claim to that title — and makes fun of our favorite eyesore of a building, among other things.

Dartbeat sat down with the creator of DMFCAFT, Luke Cuomo ’20 (as if you didn’t know his name already), to discuss his rise to fame, memes and how online advertisers apparently don’t understand economics.

So, what inspired the creation of our meme page?

LC: My friend who goes to Carnegie added me to the Berkeley meme page my freshman year, back when even Berkeley didn’t have that many followers. And honestly, I was just confused. I wasn’t a crazy meme person back then, so I was just like … “what.” I then made our page over winterim; I was bored one day and was like, “Why not make a Facebook meme page?” I think it was on exactly January 1.

What’s the weirdest thing that’s happened to you because of the meme page?

LC: People come up to me all the time. Like, several times a day. People just look at me a lot too — they won’t say anything to me, but I know they’re staring.

LC: Yeah, exactly. Oh, another thing — Professor Washburn taught “Read the World” and part of his curriculum was the meme page, so I got to be part of that class. Having my memes be part of an Ivy League course was definitely peak weirdness. Also, last Green Key, my friends came up to visit me and they didn’t believe that I was a minor celebrity here. But then we went to a frat, and immediately, like, three people came up to me and were like, “Luke Cuomo!!!” And then they realized I was serious about being famous.

Aside from all of that fame, have you experienced any other significant life changes from creating the page?

LC: Uh, I guess I spend a lot more time on Facebook. I was in a few online articles last spring — that was cool. Actually, a lot of people wanted to do ads on the page, offering me these ridiculous amounts of money. The largest offer was huge, and at the time, there were only 7,000 people on the page. It was for one ad. I was like, “Do you know economics?”

What is your favorite meme on the page?

LC: [pauses, thinks] S—t. I used to be able to answer this question. My personal favorite (that I made), is my Thomas meme.

I posted that back in February when there were maybe 2,000 people on the page. If I posted that now, I would have so many likes. [shakes head in regret] My favorite that I didn’t create was the Phil Hanlon singing “Sorry” video. High effort meme.

What do you think is a “good” meme?

LC: For Dartmouth? It has to be specific. Don’t just give me one of those, “When you do your homework at 3 a.m.” BS memes. It’s gotta be fresh. Don’t give me some rehashed KAF line meme, either.

Alternatively, what makes a bad meme?

Do you have any favorite current memes or meme formats? LC: Jif. It’s an acronym!! It’s like a word on its own!! So you pronounce it, you know, the way you should pronounce it, with the [correct pronunciation of the] vowels and consonants in that order. Also, the creator says it’s “jif."