Guide to a Freshman's Night Out 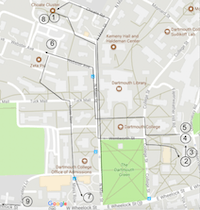 1. Start in the Choates.

Get dressed up in a themed costume for the frat party you are going to go to. Congregate with your super close friends from your floor. One of you knows someone who knows that there’s something happening in Mid-Fay. Vamonos!

If you’re feeling fancy, bring a little something for the host. Perhaps one warm Keystone Light? You’ll probably see a bunch of people you know heading over to the East side of campus, too. Hey look! It’s Mark from Writing 5!

Wait for someone who lives in the building to let you in (your Choate key won’t work here). The first few rooms are a bust; your friend of a friend’s friend's friend's brother’s little sister’s soccer teammate from home tells you to pull through to another room in the building. It’s a little better, but soon you and your ’shmob are ready for another adventure.

It’s a quick hop over for a whole bunch more fantastic dorm scenes! Some boys on the third floor are playing non-Dartmouth pong. Try it out for a few minutes, then move on.

5. Work your way up North Fay, stopping at open parties on each floor.

There are a few more people you introduce yourself to. Doesn’t hurt to be facetimey! Check your phone at LEAST every two minutes until it’s time to…

Hey, look! It’s time to get in line for the only party that freshmen are allowed to go to. Time to head over to frat row. DO NOT forget your ’shmob. It would be soooooo embarrassing if you do not arrive with at LEAST five other eager ‘21s. If you can weather the crazy line to get in, dance with other freshmen. See everyone you have ever met at Dartmouth there. That guy from Econ whose year you could never figure out? There. That girl that’s always studying with dogs on the Green? There. Your roommate? Yup, you guessed it. She’s there. Your friend says that she knows someone in Alpha Chi who can get you in. You all walk over. The brothers don’t let any of you in.*

After the fail at Alpha Chi, you decide you could use some mozz sticks. Here is where your night is tested. Does everyone at Late Night know you’re less than sober? Hate to break it to you, but probably. Under the bright lights of Collis, you can see that the night should have been over hours ago. Your costume from the fun, themed party is long gone, leaving only the tattered remnants. Your hair is wet from something (we can only hope it was raining on your walk over from Frat Row, and it is not, in fact, the sweat of one hundred other squealing freshman.) You finish your sticks, see some more random people, and decide to call it a night.

8. Go back to the Choates. Home sweet Bissell.

9. *ALTERNATE ROUTE: Go to an off campus party at a team house. It's good to practice before TDX. Warning: this route is often monitored by HPo (Route pictured on map as 9).