A Tale of Two Doppelgangers: James Detweiler ’18 and Ryan Hunter ’21

Courtesy of gif-finder.com via giphy.com 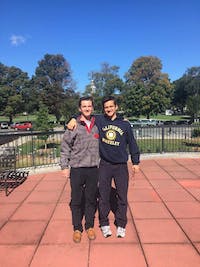 How would you react if you had lived your entire life blind to the fact that you had a twin from across the country? That scenario became a reality this fall for James Detweiler ‘18 and Ryan Hunter ‘21, a pair of doppelgangers from the Bay Area, California and Boston, Massachusetts respectively.

The two look so eerily similar that even James’ friends were getting them confused.

“I got a lot of texts from people saying they waved to me, and I didn’t wave back,” James said. “One way or another, someone told me I had a doppelganger and that kind of explains why waves were going unresponded.”

James was first alerted to the presence of his doppelganger when his I-192 Canoeing trippees bumped into Ryan at Collis.

“All my trippees were taking covert pictures of [Ryan] and sending it on GroupMe,” James said. And then they figured out [his] name so I added [him] on Facebook before I even knew [him].”

The two coincidentally bumped into each other at an off-campus housewarming party at a later date, which was an exciting experience for the both of them.

“I was so stoked because I saw him and we took a bunch of pictures together and my friends were freaking out. It was really fun,” James said.

Both are thrilled to have a twin on campus. When asked about what it felt like to have a Dartmouth doppelganger, James responded, “It feels great. It feels like after I graduate, part of me will still be here, and I love Dartmouth.”

Ryan followed, “It feels good for me too. I’ve never met anyone who people say looks exactly like me. It’s something interesting I didn’t expect to happen when I came here but I’m glad that it did.

The two share some similar preferences as well. When naming their major, the two answered, “3, 2, 1: Physics.”

Here is a more complete graph of their similarities and differences:

From pants, to majors, to most importantly looks, James Detweiler and Ryan Hunter are true doppelgangers.