28 Thoughts You Have As An Upperclassman In A Freshman Class

If you’re a ’21 reading this in the middle of lecture (it’s okay, we won’t tell), look around the room. Chances are, there’s a ... grittier looking student sitting in the back of the room. Whether it’s to get a distrib out of the way or because they changed their major five times and are playing catch up, upperclassmen sometimes take an intro class or two in the latter half of their college career. 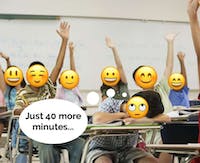 So cut them some slack, don’t take their unassigned assigned seat and read what’s probably going on in their head:

Courtesy of Paramount Television via tenor.com

3. Haha, I remember when I sat in the front row.

4. I’ll just sit in the back, it’d be rude if I scooch into the front now being this late.

Courtesy of Comedy Central via tenor.com

6. Okay okay let me open up my notes.

Courtesy of Viacom International via tenor.com

8. Oooo there’s a sale... I should be able to find a formal outfit before class ends.

Courtesy of LifeAccordingToJimmy via tenor.com

10. Surprised no one is talking over the prof.

Courtesy of MGM via tenor.com

Courtesy of Paramount Pictures via tenor.com

17. I can’t wait to see the aftermath of the first midterm.

18. Which reminds me, I should go to office hours.

21. Okay, but HOW are their clothes so clean.

22. And that girl does her hair every day it seems? Wow, goals.

23. Is that kid seriously wearing their letterman jacket.

25. But how do they pay attention for so long?

26. I should have taken this class freshman year, I’m too jaded for this now.

27. Odds are I catch the freshman plague from one of these kids.

Courtesy of NBCUniversal Television via tenor.com

Courtesy of NBCUniversal Television via tenor.com