Although each and every ’21 is wonderfully unique enough to be accepted to Dartmouth, it often seems like the same sets of stock prospies are admitted in every class. Rain or shine, some archetypal prospies are always present at every Dimensions weekend. As you walk around campus the next couple of weeks, keep an eye out for these guys — and consider if you ever were or are one of them. 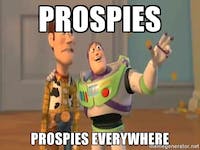 These prospies start every conversation with, “So, where else did you get in?” or “Are you still deciding where to go?” They really could not care less about your answer — unless, that is, whatever schools you name are more highly ranked than the school they’re about to proudly proclaim they’re attending. Pro tip: tell one of them you got into every top 10 school from the U.S. News and World College Ranking and watch the fear settle into their eyes.

The CW via tumblr.com

Their grandparents inspired “Animal House.” Their parents come back every year for homecoming. They came out of the womb wearing a DP2 shirt with a lone pine tattooed on their back, and they’ve been waiting to step foot onto this campus as officially accepted students ever since their dad regaled them with stories of pong as newborns. Don’t be shocked by their competitive nature — they’ve been expertly training for Masters before they could even walk.

3) Prospie from the South who is afraid of the winter

Donning a thick down jacket in the inexplicably nice, warm weather that occurs during Dimensions is the Southern prospie who has never experienced temperatures below 60 degrees Fahrenheit before. While the Dartmouth student body is sunbathing in what we consider abnormally warm weather (Over 55 degrees? Cash me and the rest of the student body on the Green in salmon shorts), these prospies are all bundled up. Most commonly asked question: “So, how bad are the winters?”

Having gone to high school just a 10-minute walk away from Dartmouth, this prospie knows the school inside and out. Already well-versed in Dartmouth lingo, prepared with passed-down stories of frats and able to quickly navigate campus, these prospies consequently often function as the leader of a prospie squad, feeling superior as they answer questions and give directions. Don’t forget to ask them about the fake Dartmouth I.D. that they most definitely had at some point during high school.

5) Prospie who inexplicably knows everything about Dartmouth

Like the Hanover High prospie, this prospie just knows everything about Dartmouth. Whether it’s from spending a little too much time on the Dartmouth website or because they have a friend or significant other who goes here, this prospie is armed and ready with Dartmouth facts. When the tour guide asks in what year Dartmouth was founded, these prospies are the first to shout “1769.” Their dream, apparently, is to be mistaken for a student way before matriculation.

6) Prospie who knows absolutely nothing about Dartmouth

This prospie managed to scrap together a compelling enough “why” essay to convince the admissions office, but whatever information these impressive BS-ers regurgitated onto their Common App has definitely been forgotten. These prospies are either fairly committed to pretending that they understand what a D-plan is or proudly announce to everyone that they know nothing about the school.

These wall stars have already friended every single member of the class Facebook page, hopping on the egregious social capital bandwagon before they even knew all the bad facetime they would be getting. To be honest, these prospies probably do not even know what facetime is yet, but their e-facetime is already out of this world. They were the first to post a self-descriptive blurb, complete with the green heart and tree emojis, and continually ask questions like “Does anyone else like to do [generic activity]?” Notice the whispers of recognition that spread across a room like wildfire when one of the Facebook legends walks into a campus event.

8) Scary and intense prospie prepared to conquer the school

This prospie goes to all the academic events pencil in hand, prepared to ask professors for the syllabus. They’re the ones that have their course of study planned out down to the classes and modifications, and nothing will stop them from pushing for that early induction into Phi Beta Kappa. They were the valedictorians of their senior class, perfect scorers on the SAT and owners of some sort of non-profit or business venture. These are the people who remind you how, well, amazing your fellow prospies are — and frighten you just a little bit.

9) Prospie who just wants to go to the FratsTM

For these prospies, Dartmouth’s social scene is the deciding factor in whether they want to attend this school or not. They walk past Webster Avenue with a longing gleam in their eyes, peppering their host with any and every question about what goes on in those grimy fraternity basements. They’re the ones who post “any good parties” on Yik Yak every Dimensions, only to receive “5 Rope Ferry, BYOB!” as a response every time.

10) Prospie who is terrified of the FratsTM

At first glance, the behavior of this prospie is not unlike the behavior of the prospie who is obsessed with entering a frat. Both prospies ask their host quite a few questions about Greek life, but the difference lies in amount of fear that results when the prospie who is terrified of frats hears the words “vomit” and “boot.” That infamous Rolling Stone article managed to scare these prospies enough that the very sight of a Greek letter puts them on edge.

Perhaps this prospie was the single resident of North Dakota or was raised in rural Vermont, because he or she is totally shocked by the bustling city life of Hanover, New Hampshire. While most people are either typically charmed or slightly disappointed by Dartmouth’s isolated location, these prospies are amazed to see three Thai restaurants, a J. Crew and Starbucks all within walking distance.