People You Wish You Had On Find My Friends

Find My Friends, aka the best app creation known to man, has steadily blossomed into a way for friends (and enemies) alike to track the every location, whereabouts and habits of anyone who you can get to share their location with you. Some people might be hesitant to join in the fun (is it creepy?), but let it be known that using Find My Friends is neither creepy nor invasive in any way. We've all had those desperate moments when we want food from Late Night  but cannot bear to meander from the cozy comfort that is a dorm bed. No need to fear, though - hit up Find My Friends and extort that one softie you know will come through with Mac n' Cheese bites when you really need them. In addition to the classic food bearer, however, there are some other people you could really benefit from having on 24/7 location sharing - trust me: 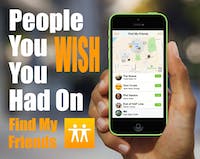 This one is too obvious. Think about how much easier this would make your life — on the days you are stressed, look sickly and are too flustered to conjure up smooth and classy flirting abilities, it’s nice to know where NOT to be. Sure, it may mean an inconvenient detour, sometimes trekking through snow and sleet to avoid running in to the love of your life, but wouldn’t you rather have it that way? On the flip side, on those days you’re feeling 10/10, you can inconspicuously run into them. “What? You eat at Collis now too? Crazy, we have SO much in common!” “I totally didn’t know you study in this spot of 4FB, so do I!” “Wow, what are the chances I would be walking past your dorm room door for a totally unrelated reason at the same second you walked out? Serendipity I guess!” Just make sure you always have your backstory lined up for when they ask why they’ve been seeing you every 15 minutes for the last week. It’s all about being ~subtle~ and ~not-creepy~.

The Person Who Has Witnessed You at Your Worst:

We all have that one person. You see them exclusively when you’re doing something weird, pathetic or both. You will never lay eyes on them at any other time. They were there the day you had to drag your gruesomely ill body across campus to Dick’s House to get your strep test, they were there that night in a frat when you ripped your Apple Bottom Jeans as you tried to get “Low, low, low, low, low, low, low, low” and they’ve been there as you exit Collis in a disgruntled fashion carrying an ungodly amount of mozz sticks after a long night of studying in grungy sweats on 3FB. If you could just show this person — just once — that you aren’t ALWAYS a trainwreck of a human being, things would be better. But we all know the universe is against you, and you’re going to need the help of Find My Friends to do this.

The Person at the End of the KAF Line:

This is purely for planning and convenience purposes. If you had this person on Find My Friends, you could decide on a lot of important things before heading towards KAF — which you know you’re going to do regardless of how long the line is because you’re an addict. For instance, if the last person in line is just past the doorway, maybe just bring that novel you’ve been meaning to read and a light snack to keep your energy up as you wait. If they’re behind that corner you round to get to FFB, maybe also bring your laptop and a lawn chair so you can finish a couple episodes of Netflix while you wait too. If the line is all the way into FFB territory, you might as well bring your hibachi grill and cook yourself some dinner while you wait in line. You’re going to be there for a while, and when you finally get to the counter, all they’re going to have left is a misshapen apple and a side of that pink-ish stuff.

Anyone Whose Text You Haven’t Responded to:

You were totally going to text them back in, like, two seconds. No lie. You just got super busy all of a sudden, and then your mom called, and then you realized you had to work on that paper, and then you were taking some “me-time” to watch Netflix and by then you’ve just had SUCH a crazy day that you had to go to bed. But for some reason, when you’re walking across the Green staring intensely at your phone as you read through Facebook updates from your aunt’s friend’s coworker’s dog, the person who texted you a direct question five hours earlier is not very understanding. With Find My Friends, you don’t just have to avoid their texts, but you can also avoid them in person as well! Yay for the digital age, bringing us together <3 #wholesome

Okay, so technically not an actual person, but hear me out. You’re excited to go out Friday night, but for some reason nowhere sounds that appealing. The lines to get on table at Frat X are at least five (are there really that many people in the basement?), you’re considered a “menace” at Frat Y, you’ve been heavily avoiding conversations that may arise at Frat Z and for some reason alternative social spaces are just not cutting it for you that night. What you need, is to find out where the scene is! Don’t waste time waiting for unreliable drunk assessments of different locations from other people. Instead, just check Find My Friends Scene, grab your fracket and skrrt to wherever you can find the best balance of good music, pong, enjoyable people and regulated temperature (Sorry, Beta).