Recently inspired by Donald Trump’s use of ~alternative facts~, Dartbeat has compiled a list of alternative facts at Dartmouth. These are totally true, not at all false and completely factual statements about our magical life in warm, sunny Hanover. #fact 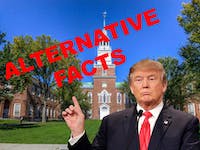 If you’ve been searching campus high and low for the best Snapchat lighting—you know, the kind that makes it look like you drink eight glasses of water a day and sleep at night — then you may not have realized that the best lighting is right under your nose. Yes, that’s right. Your dorm room! And I know what you’re thinking, “Annika, no way, it’s impossible for my dorm to be any better than it already is! I love the Choates! I love communal bathrooms!” Well guess again. The harsh, fluorescent lighting brings out the best in everyone, encouraging you to embrace flaws not only by exaggerating ones you knew existed but by pointing out ones you never even knew were there! Also, one more reason to take all photos in your dorm room: Nothing says “hire me” like a LinkedIn profile picture of you with your unmade bed, your roommate’s bra and a poster of Beyonce in the background.

Alternative Fact #2: Dick’s House will rarely ask if you are pregnant.

And if they do, it’s for good reason. I mean what do you expect if you go to Dick’s house with a cough, a fever and a sore throat in the middle of flu season? The only logical explanation is that you have been #blessed with an immaculate, beautiful conception. I don’t care if you have white dots on the back of your throat and “know what Strep feels like.” You’re pregnant. I don’t care if the unnatural angle of your arm may suggest you broke it while skating on Occom Pond. You’re pregnant. I don’t care if you’re a guy. You’re pregnant. Time to send out some “Save the Dates” for your baby shower – why send a flitz when you can send a baby shower e-vite instead? Definitely get on it, though, and do this sooner rather than later – you know how busy the middle of term can get.

Alternative Fact #3: You will never see old hookups around campus.

It just doesn’t happen. I’m so serious. The guy you hooked up with during Highlighter at Heorot freshman fall? Won’t see him until at least junior spring. The girl you hooked up with on your floor after playing a few too many games of pong? She must have transferred because you never saw her again, even at mandatory two-hour floor meetings. The vast expanse of Dartmouth’s campus and the massive number of students makes running into an ex-hookup not even slightly probable. You definitely won’t see them at Foco while you’re carrying a massive plate of fries (that you were totally only planning to eat HALF of). And you definitely won’t see them as you’re running late to your 2A with no makeup on as your hair begins to freeze, courtesy of #HanoverWinters. And you 100 percent won’t see them walking across the Green with all of their friends while you are alone, subsequently forcing you to use the old, “Wow, I’m so popular. I have to stare at my phone the ENTIRE walk across the Green.” So don’t worry. You’re fine. Everything is fine.

Alternative Fact #4: The KAF line is shortest between 10s and 11s.

If you have exactly 15 minutes to walk from the HOP to the LSC every Monday, Wednesday and Friday on the way to your 11, you should definitely stop by KAF. You’ll probably have time to order your drink, add cream and four sugars (don’t pretend you don’t) and sit and peruse the premises and get some #facetime for a few minutes before continuing on your trek for enlightenment (a.k.a. the walk to your Bio12 class).

Looking for an inviting and relaxed environment where you can end your Friday night? Boy have I got the place for you! Don’t walk back to your dorm in the cold or trek to Late Night for some good times, good food and good conversation with friends. Instead, try TDX basement. Here you will find some soft jazz music playing in the background amidst the enlightened conversation of intellectuals as they reflect on their classes and academic findings. The homey glow illuminates spotless floors, and you just know your fracket is safe upstairs, splayed for all to see on the center couch.

Courtesy of omgif.net via giphy.com

Alternative Fact #6: Posting about your fracket on Facebook will guarantee its safe and unhumiliating return.

If, for some reason, you did not follow my advice and went somewhere other than TDX after midnight, I’m afraid your fracket has probably been stolen. “Alas!,” you might say. But don’t fret! Fracket stealers are people too! They have hearts, are most definitely in your class and check Facebook regularly — just like you and me. If you post on your class’ Facebook page about your case of mistaken fracket identity, it will surely be returned to you along with a sincere apology. I mean, come on, who else would have a run-of-the-mill black down jacket from Walmart? However, if you are suffering from an unusually troubling situation, your odds of return are increased by (1) threats, (2) begging and (3) offers of cash rewards/DBA.

Courtesy of youtube.com via giphy.com