With 17W coming to a close, many of us will (hopefully) be taking off for destinations where we can actually see the sun and, even better, expose parts of our bodies that we barely remember could be exposed to those warm rays. Underneath the layers of Canada Goose jackets and long underwear lives a person who once knew what it was like to be tan, skinnier and not sleep deprived. But alas, unless you're a gym rat, winter bodies don’t translate into year-round beach bodies. With only three weeks left in the term, you’re going to have to do a quick turnaround if you don’t want to scare people away with your paleness and obvious consumption of KAF baguettes when you hit the beach this year. Here are a few quick changes you can make to your everyday life to make sure you're Instagram and warm weather ready (read: any climate at or above 50 degrees). 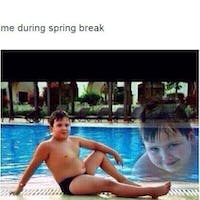 2. Eat a KAF salad for every meal

Yes, the line might be long (try doing some squats or wall sits while you wait), but your beach bod will thank you if you eat that New England salad instead of those four slices of pizza you were thinking about. Your taste buds won’t shrivel up and die, plus you’ll run out of DBA by the end of the term, so you’ll end up starving those last few pounds off in the final week anyway.

Sure, no matter where you walk these days you’ll probably eat shit at least once but try walking on unsalted, unplowed paths to class instead. This is a fool-proof way to get in leg day while creating your own shortcuts. If you're really looking to lose that water weight, try layering up under your parka so you break a sweat. For the best results, leave for your destination without enough time to get there so that breaking into a sprint is mandatory.

Yes, stairs do actually exist in Baker-Berry. I know - you must be shocked. Two flights of stairs might not sound like that much, but if you put weights in your backpack and take them two steps at a time, you’ll be (almost) as toned as Beyoncé herself by finals period. You might arrive on 3FB panting so loud and sweating so much (disclaimer: not all strategies are truly sweat-free) that the peace is disturbed, but is any attention really bad attention? If you don’t think you're ready for such intense cardio, take it easy and just start with walking up to 2FB. Be warned, however: if you study there, toned or not, be wary of irrelevancy.

5. Go out without your fracket

With the ever-increasing rates of stolen frackets this term, leaving your pink leopard print coat at home is an overall win-win. Your coat will not be stolen, and you’ll also have to run from frat to frat to avoid getting hypothermia. Depending on where you live, this could be a sprint or a marathon, but the more frats you attend, the better workout you’ll get. As part of this regimen, I also recommend attending dancier frats and playing ~soft~ water pong to cut down on your beach bod’s worst nightmare: Keystone.

By following these simple steps, drinking lots of water and saying no to the demons that are Dominos delivery and Late Night Collis, you’ll be beach ready in no time. For the best results, attempt to tan under the vitamin D lamps around campus and possibly at the Top of the Hop if the sun actually decides to shine. If all else fails, there are always spanx and the one-piece.