The Most Comprehensive Instant Noodle Review

With midterms coming up you may find yourself short on time, meaning that treks to FoCo, Collis or even into town for food may become few and far between. Just how will you manage to spend your endless meal swipes (’20s), or your quickly-declining DBA (everybody else) in the most efficient way possible? With the ultimate college solution: instant noodles.

I’ve decided to do you all a favor and taste test every instant ramen bowl I could get my hands on. I only chose the prepackaged noodles that you simply add water to, because who has the time to cook it in a pot when ~academic rigor~ awaits. I split the categories between the noodle-ier yakisoba and the soup-ier ramen, and looked for three key traits: flavor factor, palatability and healthiness.

The Maruchan Yakisobas have little to no broth, though actual yakisoba is not supposed to have any broth. My microwave began to make a slightly high-pitched buzz halfway through cooking all of these, and I think it began to give out, as each Yakisoba became soup-ier than the last. The box is big and will definitely leave you full with some noodles to spare. Regardless, here are the contenders: 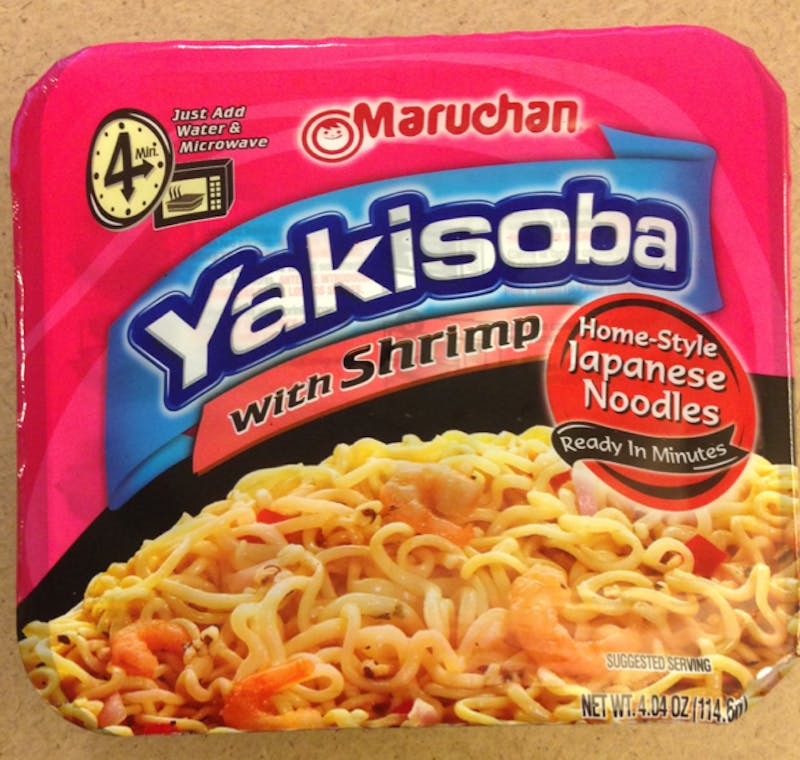 Flavor Factor: Surprisingly not bad! This yakisoba is neither very shrimp-y nor seafood-y and has just a hint of ocean. It is slightly garlicky, but not a good garlic flavor, making it overall very meh.

Palatability: The mini shrimps freaked me out a lot, though there weren’t too many to worry about. The sauce gets thicker as it cools, leaving a slightly granular paste covering your noodles.

Healthiness: 540 calories, 12 grams of saturated fat, and 1160 mg of sodium for the entire container 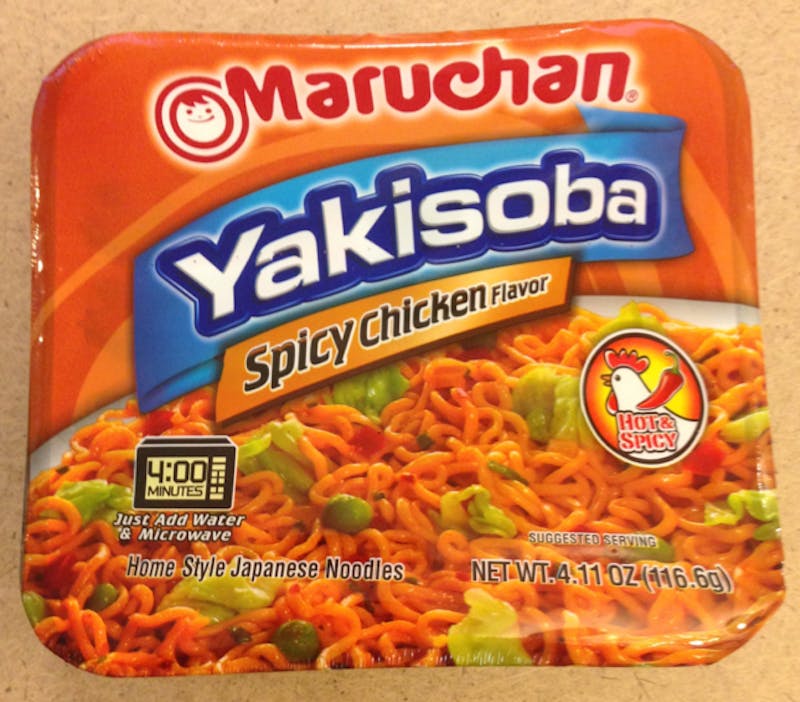 Flavor Factor: Despite its name, this is not very spicy. There is some spice, which primarily comes as an aftertaste, but it is not “crying-level” spice. There is not a lot of chicken flavor, as most of the flavor seems to come from the spice.  Overall, this is not a bad thing.

Palatability: There is cabbage in this one, so cabbage haters beware. Flavor slightly deepens as it cools, and this is surprisingly a pretty good yakisoba.

Healthiness: 540 calories, 12 grams of saturated fat, and 1040 mg of sodium for the entire container 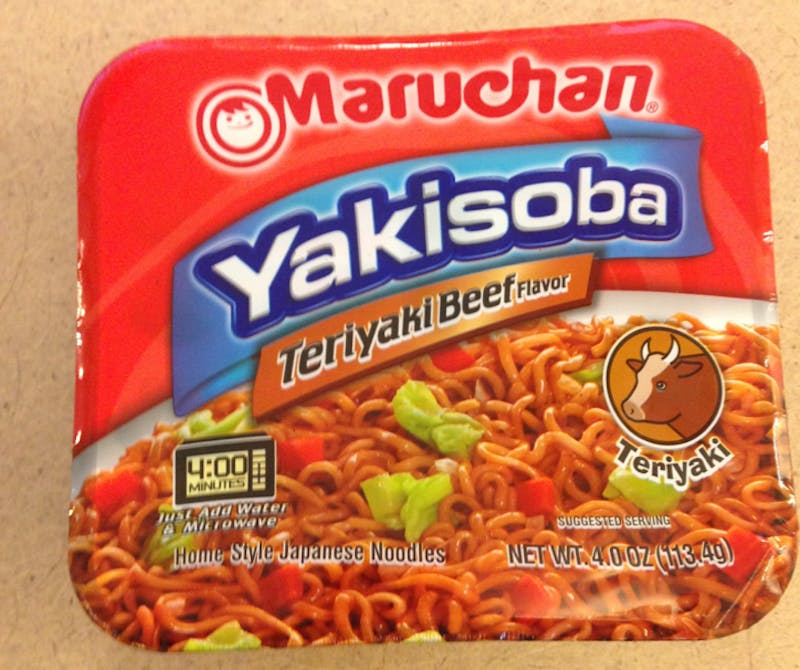 Flavor Factor: This tastes more like a weird barbecue flavor than teriyaki.  It definitely tastes the most like meat and makes you expect to find some meat in there.

Palatability: This one came out slightly brothy, as my microwave began to give out. I didn’t think it was very good, just sort of decent, whereas one of my floor mates liked it.

Healthiness: 520 calories, 10 grams of saturated fat, and 1320 mg of sodium for the entire container


Flavor Factor: There is little to no chicken flavor, with more sweet than sour taking over these noodles. Pineapple is listed on the ingredients list, explaining the fruitiness.

Palatability: Definitely not what you’d expect in a ramen. None of my floor mates liked it due to its sweetness and slightly weird aftertaste.

Healthiness: 560 calories, 12 grams of saturated fat, and 1420 mg of sodium for the entire container. This flavor has the most calories, most sodium and about an equal amount of saturated fat compared with the other Yakisobas.


Flavor Factor: This is very bland, with a hint of chicken, and not much else going for it.

Palatability: A very standard noodle and a pretty bland chicken flavor make this a very mediocre yet customizable bowl — easy to eat on its own or with add-ins.

Healthiness: 520 calories, 12 grams of saturated fat, and 1200 mg of sodium for the entire container

Overall, the Yakisobas were not at all too salty, unlike other instant noodles. The noodles were all the same, and not terrible, but not terribly good either. The Spicy Chicken wins because it reminds me of a sad version of Collis stir-fry with the Dave’s spice on top.  Anything that vaguely resembles the real food that is Collis stir-fry is a winner in my book.

The ramen is just what you’d expect of instant ramen; each was slightly salty, though nowhere near as salty as those noodles that come in a Styrofoam cup and taste like tears of sleep deprivation and self-loathing. Anyway, here are the contenders: 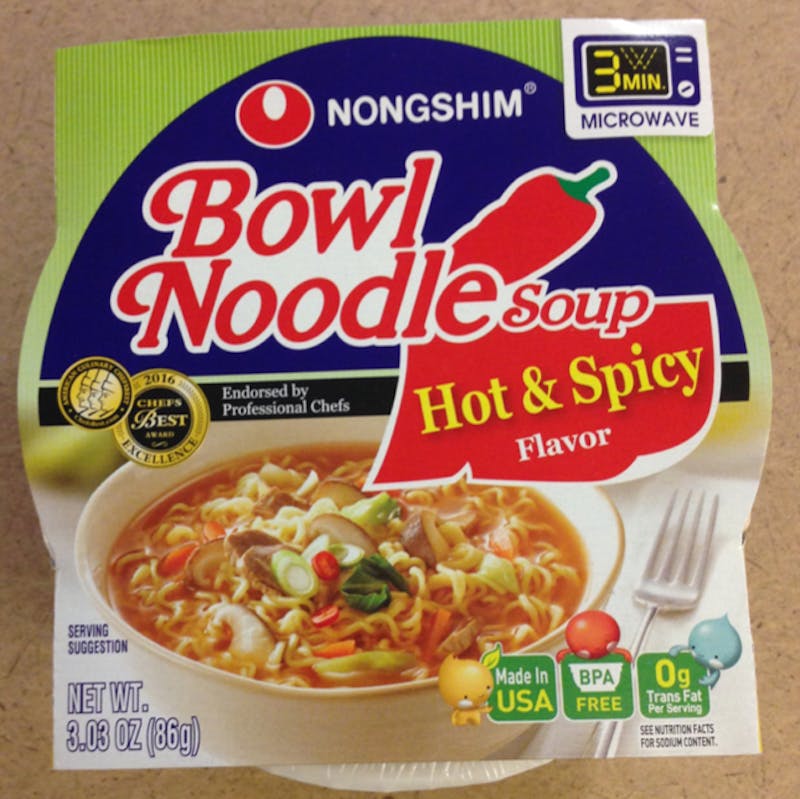 Flavor Factor: This flavor name is deceitful. I was expecting heat and spiciness that only Satan himself could handle, but that is not the case. It definitely has spice, but it is not overwhelming. There’s also a cute little white-and-pink swirl that tastes like seafood, so props to it for being cute but tasting nothing at all like real fish.

Palatability: Other than the cute little swirl made of what I assume must be dehydrated fish meat, there is no flavor except for spice, so it gets boring quick. 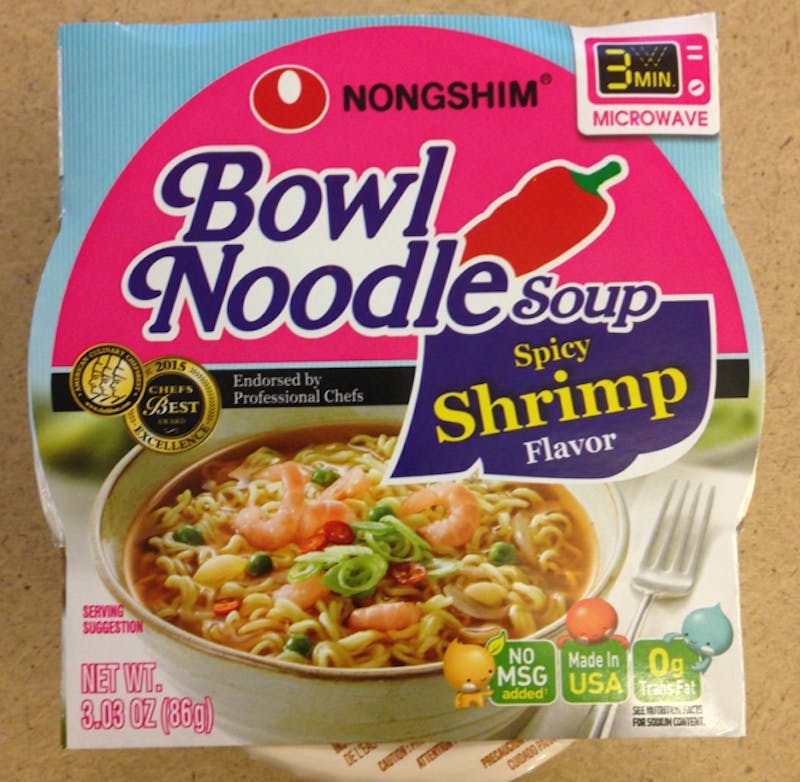 Flavor Factor: If you want something that tastes seafood-like, this is the ramen for you. It is not necessarily a shrimp flavor but definitely something that lives in the ocean.

Palatability: It’s okay for a little bit but gets bad pretty quick. Instant ramen and seafood do not seem to mix.

Flavor Factor: This was definitely spicy. The chicken flavor was slightly there and gave it more depth than the Hot and Spicy flavored bowl.

Healthiness: 400 calories, 6 grams of saturated fat, and 2550 mg of sodium per bowl. This flavor has the most calories and sodium and about the same amount of saturated fat as the other Bowl Noodle Soups. 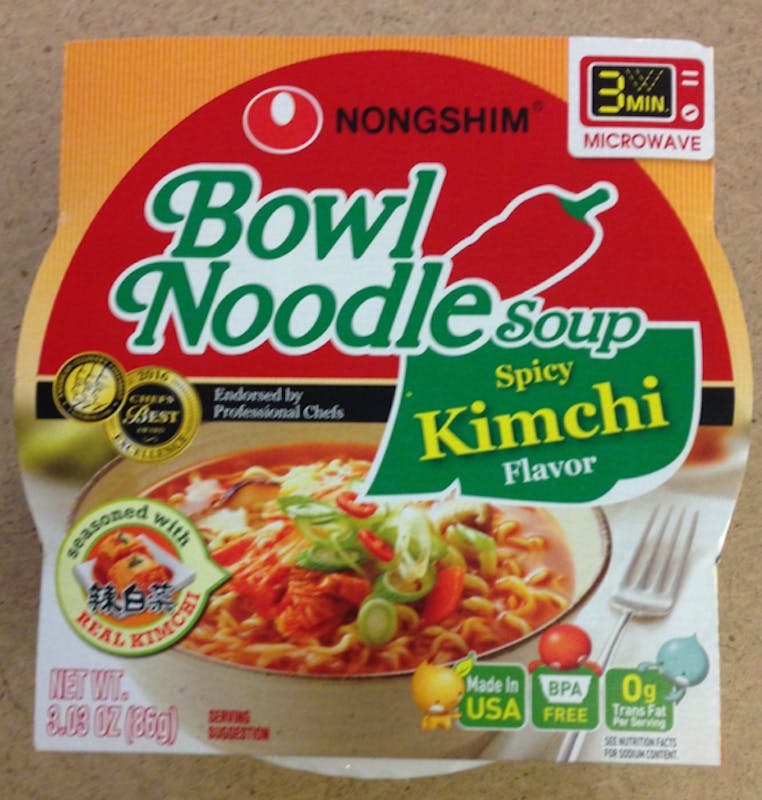 Flavor Factor: This one has a little bit of a sour factor to it from the kimchi, which works well with the spice to bring some additional flavor.

Palatability: The tastiest of the soup bowls, could be eaten as is, and would be even better with some add-ins. The sour and spicy is a great one-two punch. 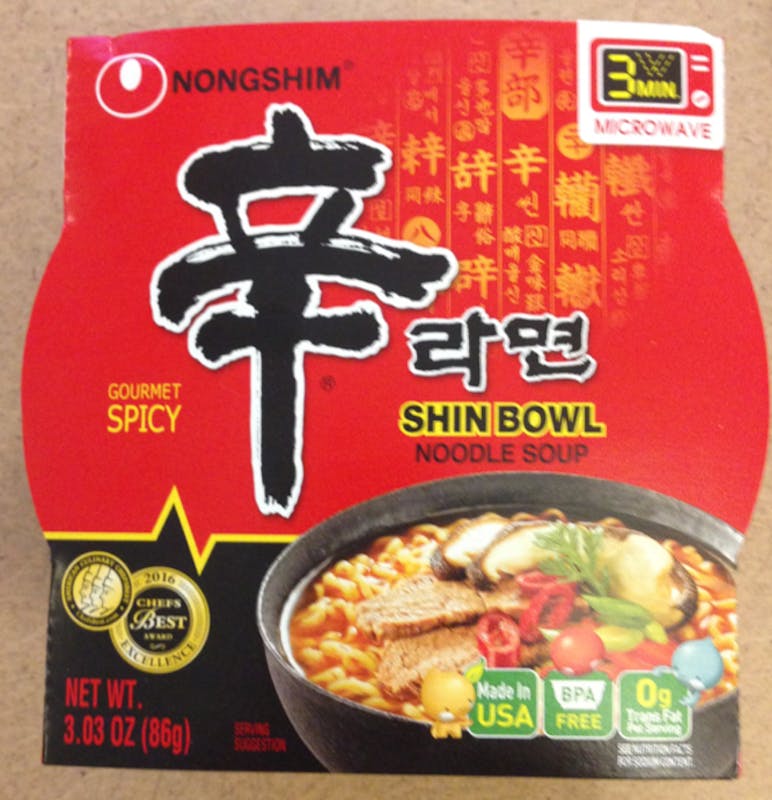 Flavor Factor: Holy spice. This is the spiciest of all the bowls and noodles. My tongue is still burning.

Palatability: Definitely edible, and all the spices actually make it better and give it layers of flavor.

Overall, the noodles had little to no flavor, with the broth at the forefront of Flavor Town. The Spicy Kimchi wins because of the combo of flavors and relative healthiness. I could actually see myself eating it in panicked moments of study, the spice reviving me to continue reviewing notes and PowerPoints.

These instant noodles are sold at the McLaughlin and East Wheelock snack bars as well as other locations for roughly $3 a package. When you don’t have the time to go to a free food event, the next best thing you can do is spend your DBA/meal swipes wisely. Save time, save money and acquire only the finest noodles. *mic drop*

All images courtesty of Melanie Kos