It’s safe to say that Dartmouth is obsessed with Dr. Seuss. Also known as Theodor Geisel, the famous Dartmouth alum left a massive footprint behind when he graduated in 1925. Actually, it might be more accurate to say that he put on sharp, spiked shoes, stomped around, and even jumped up and down. Freshmen eat green eggs and ham at the Lodge during trips, training us to learn Dr. Seuss’ Dartmouth connection before we even move into our dorms. What’s more, the Dartmouth Co-op sells “Thing 1” and “Thing 2 costumes” for infants, Baker Library has a whole room devoted to the guy, and, oh right, someone named the entire medical school after him. This year’s winter carnival theme is “Seuss On The Loose,” but it is far from the first time we have honored our beloved alum. Check out these Winter Carnival themes of the past that further salute Dr. Seuss. 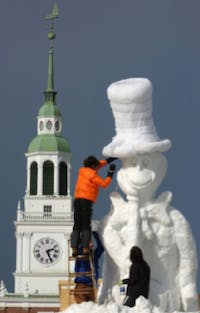 1992: How the Grinch Stole Carnival

The massive keg-guarding Grinch, which sat at 26 feet tall, represented more than one Dartmouth tradition.

2004: Oh, The Places It Snows: A Seussentennial

The 35-foot-tall Cat in the Hat, which was featured in USA Today and other media outlets, was a tribute to Dr. Seuss’ 100th birthday.