Although I know next to nothing about hockey, I was sent on assignment by my editors to liveblog my experience at the Dartmouth Men’s Hockey game against Quinnipiac last Friday. I was to give a "fan’s-eye perspective" of what was going on (I am using a very loose definition of “fan”). Over the course of two and half hours there was cheering, singing, booing and cursing. Basically, how all sporting events should be. Here’s a minute-by-minute rundown of the major goings-on at Thompson Arena's student section:

7:57 p.m.:Refs skate onto the ice. With no players in sight, it’s their time to shine. Someone in the student section yells, “Yeeaaaah, these referees are sick.”
8:01p.m.:My freshman year roommate and current varsity goalie, Chuck Grant’s name is spoken over the PA.
8:02p.m.:We all rise to sing the American national anthem. Despite the fact that the Canadian flag and American flag are side by side in the rink and roughly 20% of the team is Canadian, we do not sing the Canadian national anthem. 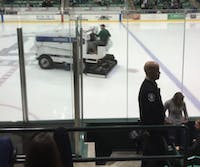 8:04p.m.:Demi Lovato's ode to lesbian experimentation “Cool for the Summer” plays over the speakers. I wonder if it’s one of the player’s pump-up songs.
8:09p.m.:My girlfriend makes a joke: “Ever hear of the time a bunch of guys went to a fight and a hockey game broke out?” She then does a fist pump at her own joke. (To be fair, I would have done the same exact thing.)
8:13 p.m.:Brilliant save by Chuck. I wonder if he remembers when I set up the internet on his PlayStation 3, and we high fived that one time.
8:16 p.m.:Staring at people’s jerseys, I notice Dartmouth has a player named Kilistof, which is the most badass last name ever, especially for a hockey player.
8:20 p.m.:Dartmouth scores and “Let Me Clear My Throat” plays. (This song apparently plays every time Dartmouth scores.)
8:30 p.m.:“Levels” by Nick Jonas plays.
8:33 p.m.:The Safety and Security officer with the shiny, bald head is explaining to his six-year-old son what is going on.
8:34 p.m.:My girlfriend asks me how I knew that was a Nick Jonas song that was playing earlier. I may have to drop the ruse with her that I am cool.
8:35 p.m.:Dartmouth player Bullock falls and pulls an impressive break-dancing type move, throwing the puck towards the goal. I realize this game has been going on for 30 minutes and this is the only analysis I have of actual gameplay.
8:41 p.m.:End of first period.

9:01 p.m.:Second period begins.
9:02 p.m.:Fight almost breaks out on the ice. The DJplays “Welcome to the Jungle” to diffuse the tension.
9:02 p.m.:Qunnipiac’s Tanner McMaster gets a penalty for boarding and having the preppiest name imaginable.
9:05 p.m.:Another fights almost breaks out on the ice. The DJplays “Bad Blood.”
9:07 p.m.:A girl behind me yells "Do it for Barry." Barry Obama?
9:18 p.m.:I accidentally call my girlfriend "broski." She is mildly appalled.
9:23 p.m.:Girl behind us says "Wait, I do have lotion. What am I doing sitting here like a dry [redacted]?"
9:26 p.m.:My Dartbeat frenemy, Stacy Livingston, sits in the same row as me, and refuses to say hi.
9:33 p.m.:Second period ends.
9:36 p.m.:I think about the logic of the Jesse’s/Molly’s ad for an unhealthy amount of time. Come to Jesse’s and/or Molly’s! Here are the legs of a (probably dead) hockey player!

9:39 p.m.:SWEEET CAROLINE, BAH, BAH, BAH
9:45 p.m.:Third period begins.
9:47 p.m.:ACDC’s “TNT” plays over the PA system. Students slapping the rink glass somehow manage to be off-beat.
9:51 p.m.:Dartmouth scores.
9:51 p.m.:All students yell “It's all your fault,” at the Quinnipiac goalie.
9:51 p.m.:All students yell “Overrated.”
9:55 p.m.:PA system says Section 19 Row C gets free pizza. We're section 18 Row C.
9:59 p.m.:Dartmouth scores again!
10:00 p.m.:Student section cheers “You still suck.”
10:02 p.m.:One student suggests we yell “Your dad hates you,” at Quinnipiac’s goalie.
10:08 p.m.:Someone yells to a Quinnipiac playerwith the last name Anas, "[Redacted] you, Anas," with a strong emphasis on the “u” in Anas.
10:13 p.m.:A player from Quinnipiac appears to punch a Dartmouth player in the spine while fighting over the puck. The student section is yelling, “That should be two.” I do not know what this means. The refs did not seem to give us two. In my un-expert opinion, this marked a turning point in the game, where Quinnipiac realizes they can punch and trip Dartmouth players and call it a rally. Quinnipiac goes on to score five points in the third period.
10:25 p.m.:In response to Quinnipiac’s comeback in the third period, a guy yells to the ref, “Does your wife know you're [redacted] us?”
10:28 p.m.:Game ends with Quinnipiac up 7-5.DJplays Bob Dylan's “Wagon Wheel.”

Although our team ended up losing, the student section was a lot of fun to be in. It’s like a microcosm of all the weird stuff Dartmouth has to offer. People are in flair, people are hilarious/cruel/having a good time in general. If you're looking for a taste of pandemonium, definitely go to a Dartmouth Men's Hockey game.

All photos courtesy of Will Peisch, The Dartmouth Staff.

Will Peisch, The Dartmouth Staff