A Peek at the Hood Museum

Boxing, caribou migrations, menacing weapons, car engines that were never intended to run, walrus stomachs—Dartmouth’s Hood Museum of Art has it all. Upon a recent visit, I learned the first and second floor were only displaying a small portion of the total collection. At any one time, only one percent of the Hood’s 75,000 works of art are on display. This wealth of artwork is on campus, free to all and well worth a visit. The lack of people there during my visit is the reason for this post. Seriously, with the exception of staff and security, I was alone in my visit. So I took some photos of my favorite pieces, in the hope that Dartbeat readers will go see them in person:

“Our House is on Fire” by Shirin Neshat 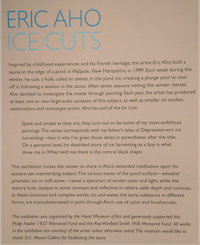 The emotion-laden eyes of these two Iranians greet you upon entering the Hood.

Continuing on into the main room, a Grecian urn draws my attention. This “Panathenaic amphora” dates from 480-470 BCE, and is apparently the work of “the Berlin Painter,” an enigmatic Athenian.

This array of weaponry is the product of different African tribes and civilizations. It can be found just to the left of the main room.

“In the Library” by Frederick Carl Frieseke

The power of a book and the power of study are both illustrated here. How many Dartmouth students can identify with this woman?, I wondered. I would be willing to bet more than a few.

In the same room as the Frieseke, you’ll find this piece by Regis Francois Gignoux. Something about this painting seems to evoke the contentedness of tripees and their leaders, the spirit of Trips unwittingly captured by a Frenchman.

“Back from the Orchard” by Eastman Johnson

Can’t you just see this guy on the Green in the springtime?

This guy not only pulls a javelin from his thigh, but goes on to defeat the Spartans in the Battle of Sellasia.

“Virgin and Child” by Pietro Vannucci

Pietro Vannucci, nicknamed Pietro Perugini, painted “Virgin and Child with Saints” with a dark palette and a classic Renassiance touch.

My eye was irresistibly drawn to the center of Napaltjarri’s “Kaningarra.”

A V12 Mercedes-Benz engine reimagined as a work of Moroccan metalwork and calligraphy.

If these pieces weren’t reason enough to visit the Hood Museum, go because of Eric Aho. Never in my life have I been so struck by art. I will not include pictures of the artwork here, because all pictures of museum pieces lose something across the digital divide. That said, I’ve let that slide for the better part of this post, but Aho’s “Ice Cuts” demand to be seen in person. They are, quite simply, spectacular. I will leave with the museum’s description: