I was especially excited to write my Dartbeat story for this week after receiving my assignment from my editors. Grace’s exact words to me were this: “Ask the Rauner librarian to show you the coolest shit they have.” Following her eloquently stated orders, I did just that (though using a slightly more polite phrase, of course).

King signed the letter in blue ink on page two. He concluded, “I am looking forward with great anticipation to being on the campus of Dartmouth College. With every good wish, I am sincerely yours, Martin L. King, Jr.” 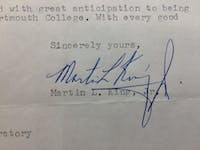 He eventually delivered his speech titled “Towards Freedom” on May 23, 1962 to an overflowing crowd in 105 Dartmouth Hall. Fifty-four years ago, King stood in the same building that I, frazzled and distracted, sprint into at 7:44 every morning for drill. Pretty cool if you actually stop to think about it.