I drove down Main Street in the rain and the fog, the windshield wipers of my 2004 Subaru Baja beating frantically to keep pace with nature’s onslaught. My tires held onto the rocky pavement for dear life through several inches of standing water as I navigated the road’s twists and turns. I was almost there — my heart pounding in anticipation of a good meal, my stomach growling, my mind focused on the task at hand. There. In the distance. Could it be? A strip mall that I knew to be my destination loomed in the distance. It was go time. 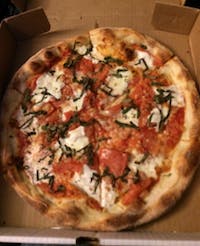 I'mI walked into Cantore’s Pizza and immediately felt welcomed. The place was full of light, and its cheery interior was aided further by the presence of various framed newspapers and sports jerseys on the bright-red walls. Football played on two big-screen TV’s. There is a bar in the middle of the restaurant, topped with white granite (shout-out to EARS 02) that resembles an old-fashioned soda counter.

I had placed a pickup order no more than 25 minutes earlier, and the pizza was already ready when I walked up to the counter. The staff was friendly and efficient, and I was in and out in less than 5 minutes.

A fifteen-minute drive back still stood between me and my feast, which now sat next to me in the passenger seat. Based on smell alone, I was already poised to give a glowing review. I kept looking to my right expectantly, as if the pizza were going to make the first move. Central thesis: I was hungry.

I had ordered the Queen Margherita pizza: red sauce, garlic, sliced tomatoes, fresh basil, fresh mozzarella and Parmesan. When I finally made it back and tore open the cardboard box, it was well worth it. If there were one word to sum up Cantore’s take on this classic pizza variety, it would be “light”. The vegetables were sliced thinly with precision, and layered on a flat, flaky, doughy crust. Stylistically, the pie is quite similar to what one might get at Ramunto’s, but I dare say Cantore’s does it better.

Although C & A’s took home the trophy in my Hanover pizza extravaganza, this trip to West Lebanon proved that things might just be better outside the bubble. The place seems to have gathered some acclaim for their sandwich selection as well. Conor S. of Newton, MA called their steak and cheese “bombtastic” on Yelp—so in addition to learning that Conor is most definitely a cool guy and someone I’d like to hang out with, I have also decided to make a trip back to Cantore’s in the future.