Dartmouth students receive thousands of blitzes from the campus listserv every day (Okay, that’s an exaggeration, but we all know the pain of a flooded inbox.) Last year, I decided to embrace the blitzstorm phenomenon: Instead of frantically deleting every blitz that didn’t directly relate to me, I filtered through my inbox to narrow down the best listserv blitzes of 2015. Here are the top 10:

Dartmouth Asian Organization: Ramen
DAO added a picture of ramen in their blitz and I was sold. Then they added a second picture of a random man eating ramen from his bowl-shaped beard. And then a third picture of JT with his ramen noodle hair. You*snap snap snap* 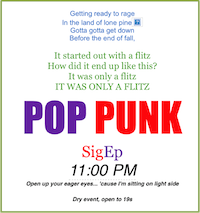 Cabin and Trail
This blitz was everything I needed to know about the apparently lumbersexing and woodsmoke-scented Chubbers of the DOC.

Gamma Delta Chi: GDXmas & Theta Delta Chi: TDXmas
One of the (rarely complained about) cons of a six-week winter break is that we can’t celebrate the holiday season with our Dartmouth friends. Thankfully, the brothers of GDX and TDX succeed in bringing the holiday spirit (and bad poetry) to Hanover every Christmas season.

Association of Women in Math
Things never to include in a flitz: 1) Math jokes and 2) Minions. But we appreciated the effort anyway, AWM.

Sugaire Style
Last November, Sugarplum, Dartmouth Aires and D-Style were all featured in one blitz (and one once-in-a-lifetime performance), so naturally it made our top 10.

Chi Heorot Highlighter Party
The brothers over at Heorot learned a thing or two about hook sentences in middle school. The list featured in this blitz might actually be more cringe-worthy than AWM’s study session invite…

Dartmouth Women's Rugby Championship
2015 was a huge year for Dartmouth Women’s Rugby: Women’s rugby became an official varsity sport and the team dominated their competition all season long. We can’t help but look back and smile at the team’s blitz for the 2015 Ivy League Championship (P.S. They won.)

Sigma Phi Epsilon: Pop Punk
SigEp charmed us all with their remix of The Killers hit. Bonus: Their party was even more lit than their invitation.

Chess Club
The Chess Club reeled us in with their "CONGRATULATIONS!" subject line. Despite the trickery, their blitz taught us two things: 1) We have a chess club and 2) The room in Foco is called the Paganucci lounge.

The Sings
I really thought this a capella group went out in the snow wearing only their swimsuits…until I looked outside and realized there was barely snow on the ground. The Sings score points for major originality (and managing to dupe this Dartbeat writer).