I would really like to believe that as our first year at the College comes to a hurried close (yikes!), us ’18s have pretty much figured it out. We’ve got the lingo down, most of us can play a decent game of pong and we all own at least one article of Phil Hanlon paraphernalia. But I’ve found that beyond Lou’s, Stinson’s and CVS — also RIP College Supplies Store — most of us have no idea what else there is off-campus. I just found out that there’s a Subway in Hanover. When I asked a fellow ’18 if he had ever seen the Subway, he legitimately thought I was talking about an underground train system. What’s arguably even sadder than that is that most of us have never visited Hanover’s poster store, IDVD and Poster, which has a few unexpectedly great items. 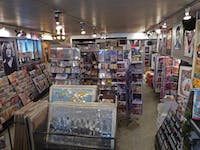 So I took it upon myself to hit this place up, snoop around until I made the storeowner uncomfortable and find some of the oddest/coolest/cringiest things that the poster store had to offer.

I’m sure most of you have seen the John Belushi poster in the store window, but venture to the very back and feast your eyes on this beauty:


I worship at the altar of the Preppie Test and firmly believe it should be incorporated in the college admissions process. Not only is the test grossly accurate, but also the Preppie on the poster is donning the douchiest ensemble I have ever laid eyes on, most notably the flood level pants, baggy boxer shorts and my personal fave — the floating crotch. I laugh because all he’s missing is a cigar to look like you did in 50% of your high school graduation pics.


The poster store has an incredible amount of music to offer in pretty much every medium you can think of, but for such a small shop in Hanover, I was not expecting itto have so much Celtic and Irish music. I literally spent 20 minutes trying to figure out how I was going to play this cassette of Irish Whistles. I never figured it out, but I bought the tape anyway. I’ve always thought I was ambivalent to the tin whistle, but when you stick it on a cassette with some fancy Celtic font and a picture of some (presumably Irish) rocks, I guess there’s nothing I won’t buy.


I realize that it seems like I’m a huge fan of the Celtic nations, but I promise I only chose this album because the idea of someone sitting in their home and listening to a pre-recorded album of Robert Burns’ poetry makes me want to laugh and cry. But Robert Burns is fantastic, and in the battle between listening to Scottish border ballads or my floormate rapping along to Chingy, I choose the former.


IDVD and Poster also has a great collection of art prints. Lovely though its Post-Impressionist prints may be, I think IDVD and Poster is the only place in the world where a Van Gogh can be found less than a foot away from a picture ofKeanu Reeves.


This store has pretty much everything you can think of — posters, comic books, vinyls, cassettes, comic books, DVDs, and the list goes on. It’s definitely not lacking in Dartmouth and Ivy League memorabilia. I found this ski program from 1945 and was immediately blown away. On a serious note, I’m glad to see that we’ve officially ditched the Native American mascot, and IDVD and Poster has tons of dated sports programs like this that remind us just how far we’ve come as an institution.

May Mansour, The Dartmouth Staff