This Saturday is Pigstick, Alpha Chi’s big event of the term. There will be music, kegs, revelry and plenty of delicious meat cooked by Dartmouth’s own Collis Ray. As a member of AXA myself, I thought I’d talk to some fellow Alpha Chi’s who swore off meat to see how they plan to approach this event. (Yes, this is a dumb idea for an article. No, I have no idea why I pitched it.) 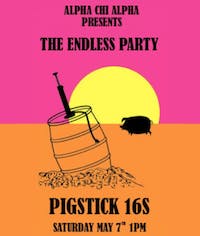 I talked to Will Hickman ‘16, brother at AXA. He’s been a vegetarian since sophomore year and stopped eating red meat four years before that. I would be remiss to not mention that he looks like a hipster Clark Kent so he must be doing something right. He doesn’t eat meat due to factory farming practices and also the fact that “when you get to organic farming, that stuff’s not as scalable. If you’re talking about feeding however many billion people we have now, eating meat isn’t a very good option.” I asked him if not eating meat on Pigstick has been a problem for him in the past and he matter-of-factly stated, “No, I usually eat a bunch of French fries.”

When I asked about his favorite part of Pigstick, he said, “I just really like outside parties, and the fact that we have a band is great.”

I also talked to Alex Bulteel ‘16, an AXA and the house’s former service chair. He’s been a pescatarian for a little less than a year. This will be his first Pigstick as a non-red meat eater. His reasoning for not eating meat is that “the benefits of me eating it are less than the cost of supporting farms that treat animals poorly.”

He was inspired to begin pescetarianism through a project on animal consciousness that he worked on last year. Alex concluded, “Many animals are conscious, many more so than one would imagine. So it really is bad to cause animals to suffer.” However, he still eats fish as a way to get protein and because their path to the plate is less painful than that of land-based animals.

Fortunately, Pigstick won’t pose an ethical dilemma for him, as he plans to temporarily give up pescetarianism to eat some pig on Saturday. He told me, “The amount of meat that is bought every year is not influenced by how much demand there is, and it’s always depleted. So me eating the meat doesn’t actually affect the animals in any way.”

Since he’s taking Saturday to eat red meat, I jokingly asked him if he considers Pigstick a “cheat day” for him to eat as much meat as possible. He said “Oh yeah, that’s funny,” in a way that suggested it wasn’t. (He was correct.) He went on to say, “I don’t usually eat that much meat to start with, so I probably will not eat a huge amount of meat. I’ll certainly, for ceremonial reasons, eat some pig.”

As for his favorite part of Pigstick, Alex said he was a fan of being at the house the hour or two before Pigstick actually starts “when pretty much everyone in the brotherhood and all the alums are there. Just having so many people you like having a good time together is the dream. That’s the highlight.” He punctuated this thought by yelling “Ted” at a passing Alpha Chi.

Talking to my brothers about how their house’s big event collided with their personal beliefs encouraged me to reexamine my own. While I look forward to eating an embarrassing amount of meat on Saturday, what they said was definitely good food for thought.