What Would Administrators Dress Up As for Halloween?

You Dartbeat readers have been very selfish lately. The Dartbeat family has been hitting you with all sorts of autumnal Halloween goodness: we’ve told you all the haunted spots YOU shouldcheck out around Hanover, we’ve given YOU eight autumn recipes to try out and we’ve helped decide whoYOU should be for Halloween. I’m putting my foot down and saying ENOUGH. It is not all about you, you, you (well, it kind of is, but still). So I am introducing the first annual “What Should Administrators Be For Halloween?” because even administrators need some Dartbeat TLC. 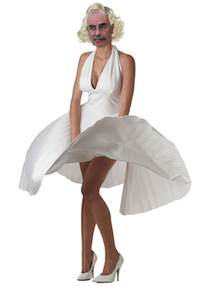 I was very tempted to make Phil dress up as Dumbledore or Gandalf. I know, he’s the big man in charge, but it’s time to think outside the box. Phil, like Marilyn, is a classic (not to mention classy — he was once an AD brother after all). Marilyn might have had Kennedy, but Phil has Gail. Am I right, or am I right?Phil is a longstanding symbol of Dartmouth, and Marilyn, well, Marilyn is a symbol of something else…

To be fair, I’ve never met or had a one-on-one convo with Gail. But she seems so sweet and calm. And when I hear sweet and calm, that makes me think that she is an undercover, crime-fighting, kick-ass vigilante by night. According to a source that I have just totally made up, Gail has been spotted leaving her home everyThursday around 10 p.m.She tells Phil she is going to the gym, but I know she is off doing her catwomanly duties and givingChristian Bale a run for his money. Can’t knock her hustle.

Dean of Admissions and Financial Aid Maria Laskaris as Joffrey Baratheon, King of the Andals and the First Men, the First of His Name, Lord of the Seven Kingdoms and Protector of the Realm

As dean of admissions and financial aid, Maria Laskaris is a hardcore decision-maker. Seriously, I have an existential dilemma every time I need to choose between broccoli cheddar and tomato basil soup. But this woman is responsible for the team that decides who becomes a Big Greener and who does not. She is fierce, powerfuland feared by almost everyone I have ever met. (I could have easily made her superwoman or Cersei, for that matter, but Joffrey’s voice amuses me, as does picturing Maria sitting on the Iron Throne in McNutt.)

According to the Office of Public Affairs, Dever"is responsible for 45 academic departments and interdisciplinary programs; 13 research centers in the natural sciences, social sciences and humanities; 382 tenured or tenure-track faculty; 800 staff members; and a $180 million annual budget.” Needless to say, this woman is one tough cookie. And shemust love telling people what to do, because that’s her job. So Umbridge it is. Plus I think Dever could really pull off Dolores’ pink pea coat, no?

That’s right, boys and girls, Bowden is head of the BASICS program! My freshman fall may not yet be over, but I have seen a Good Sam or two in my day. And all of my friends who have gone to BASICS have said that Brian is an MVP. He shows up when we need himmost and he cares for our well-being. We walk in as morons with high-risk drinking habits, Brian sprinkles some fairy dust magic knowledge on us andwe leave as better, moreresponsible human beings. Brownie points for Brian!

Interim Dean of the College Inge-Lise Ameer as Mrs. Claus

Ameer has moreresponsibilities than I can count, not to mention how far she has gone to advance Dartmouth'sstudent services.She is strong, smart, independent and holding down the North Pole until Father (or Mother) Christmasreturns.

All photos by May Mansour, The Dartmouth Staff.