One source of undiscussed stress amongst students on campus is the search for their next free term/post-graduation job. It’s almost a rite of passage to think, “Well, I screwed that opportunity up more than I could've possibly imagined.” I’m writing this personal essay partly to say that, no matter how hard you screw up trying to get a job, you’re not alone. This is the story of my Dartmouth alum idol, Christopher Miller ’97, and the worst fan/cover letter of all time. 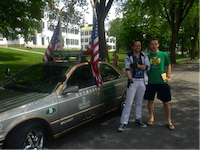 For those of you who aren’t film buffs, Christopher Miller is a film director who has co-directed with Phil Lord ’97 to produce “Cloudy with a Chance of Meatballs” (2009), “The LEGO Movie” (2012) and the “21 Jump Street” movies (2012 and 2014), in addition to the upcoming “Han Solo” movie (2018). Most Dartmouth students seem unaware that the directors of these films went to Dartmouth. I find this odd, because Dartmouth students appear to have an encyclopedic knowledge of famous alums from Shonda Rhimes to Jake “I’d Tapp That” Tapper.

My admiration for Lord and Miller films began when I saw their first movie, “Cloudy With a Chance of Meatballs,” right around the time I was looking at colleges. I knew I wanted to go into the entertainment industry after college. So, after some googling, I thought if Mr. Rogers, Dr. Seuss, Phil Lord and Chris Miller could attend Dartmouth and later find success in the entertainment industry, then so could I. Since the first two idols mentioned were, and continue to be, dead, I decided to follow in the footsteps of my living contemporaries.

My freshman year, I continued researching my guiding stars. But this interest soon turned intofull-on fandom for Lord and Miller: I read every possible interview, trade article and tweet that Lord and Miller were ever a part of. I hosted “The LEGO Movie” screenings in my dorm room at least once a term. I listened to the directors’ commentary on the deleted scenes of all their movies. I discovered that,like their films, Lord and Miller have a comic energy and respect for their audience that is both endearing and captivating. Unfortunately, though I gained much in admiration, the extent of their career advice boiled down to “get lucky and fail upwards,” which to me seemed like terrible advice for a college student.

I was stuck. I had all this Chris Miller and Phil Lord knowledge and nothing to do with it. I was tempted to reach out to them, but I was anxious about writing the perfect email. So instead, during the summer of 2014, I channeled all the trivia I had into one of the saddest and proudest moments of my life: I revamped Phil Lord and Chris Miller’s joint Wikipedia page.

If the above chart of current added text contributions on the Lord/Miller page doesn’t convince you I played a significant role in writing it (I’m “Whp9693”), the fact that the page seems to go out of its way to mention Chris’ membership in Alpha Chi Alpha, our shared fraternity, should. At the time, my contributions were about a third of the article.

Being so well versed in Chris Miller trivia made me realize that he and I actually had a lot in common:

1. We are members of the same fraternity at Dartmouth.
2. We share the same level of apathy toward said fraternity.
3. We’re government majors.
4. We contributed to the school paper.
5. And finally, he’s funny and no one has had the heart to tell me I’m not.

Of course, none of this was by design, but it made me feel like he and I would get along well if we ever got the chance to talk. This very one-sided love affair continued for years until December 2014, when Sony Pictures experienced a massive hack at the hands of North Korean cyberterrorists in response to the film “The Interview,” which depicted the assassination of Kim Jong Un. What concerned me most — other than a potential U.S./North Korea war (I contain multitudes) — was that from these leaks came an influx of film news mostly revolving around the industry’s rising stars Phil Lord and Chris Miller. I didn’t read the actual leaked emails (I may have written a living stranger’s Wikipedia page, but I’m not a creep), but the headlines were impossible to avoid. The biggest news for me was that Phil Lord and Chris Miller were working on an animated “Spider-Man” movie and a “21 Jump Street”/“Men in Black” crossover movie.

This marked the turning point for me. If I didn’t at least attempt to reach out to my idol now, then I thought I would never be able to reach him again. So, for the first time in two years, I decided to write in a non-academic context. (This was before I started writing for Dartbeat, so the last thing I had written for fun were reviews of water fountains for my high school paper.) My goal was just to get Chris Miller’s attention so he might potentially offer me some undignified yet life-changing job, maybe as an assistant to the production assistant’s assistant, or Ice Cube’s bubble bath czar. At the very least, I would get some validation that, on some level, I was doing the right thing.

Unfortunately, my first draft did little to hide my insecurities about my future. It was better fodder for a restraining order than for a job offer. For example, itstarted out with the sentence: “You guys are the motherfucking cat’s pajamas,” a phrase that grabs one’s attention for all the wrong reasons. The letter I did send to his publicist was only a slight improvement from the first draft. My intro sentence started out with: “The Venn Diagram intersection of mentally stable people and people who write fan mail is incredibly small. However…” Unfortunately, I did nothing to prove I was an outlier in this case. Though I managed to say the five things we have in common, the letter consisted of me trying to be funny with zero regard for my audience of one. Toprove I was qualified to have a career in comedy, I told Chris Miller that one of the things we have in common is that we are both “sex incarnate,” which is not a great thing to say to a complete stranger (much less a potential employer).

That’s just one example of many where I went wrong in this letter. I don’t know what I expected to happen when he read what I actually wrote. Would he somehow go, “What?! We have five things in common? And he wrote part of my Wikipedia page? Deborah, get this genius on the phone now. Did he say anything about how sexy I am?” I think the biggest issue was that, beyond coincidence and admiration for his work, I had nothing to prove to Chris that I was worth talking to. All I had was a tenuous fraternity connection and a diminishing proportion of a Wikipedia page.

As time went by and my email received no response, I began to realize the magnitude of the mistakes I made in the fan/cover letter and in my life in general. I slowly began the process of working to fix them. First of all, I realized my approach of trying to get a job solely because I’m a fan was how Buddy became Syndrome in “The Incredibles.”

Though our similarities werecute, the biggest difference between Chris Miller and me was that he had done the work and I hadn't. After former publisher of The Dartmouth,Justin Levine, suggested the idea to me, I started writing and submitting stuff to Dartbeat. Writing for Dartbeat has been the proudest achievement and greatest joy of my Dartmouth career. I’ve written obituaries for squirrels, driven around with friendly weirdos, explored storm drains, overanalyzed lyrics and given Air Bud brain cancer. Best of all, people seem to enjoy my posts, or at the very least put up with them. I have no idea if I’m failing upwards or downwards, but I’m certainly failing forwards. If it weren’t for that dumb letter, I might not have started writing as an extracurricular. And I haven’t touched Chris’ Wikipedia page since 2014, which hopefully speaks volumes about my current state of mental health.

It’s been a year and a half since I wrote that letter to Chris Miller, and unsurprisingly, he still has not gotten back to me. (In my letter, I gave him both my Gmail address and my Twitter handle just in case he wanted to slide into my DMs.) The only time I’ve ever seen Lord or Miller’s faces on campus was when a brother at AXA used a picture of Lord’s face to wipe up some beer. (It was all we had on hand at the moment.) But the experience reminded me of the value of a hero: he’s probably not going to be your friend, partly because a hero is, almost by definition, way better than you. But a hero can show you the gaps between you and him so that you can strive to fill them. After the failure of my letter, I tried catching up to Chris Miller’s body of work through these articles. It may not be much, but it’s my start.